The last 10 years of Booking.com

Ah, Booking.com. The site the hospitality industry loves to hate. Not a week goes by, it seems, that there isn't another flare-up between hotels and the OTA giant. Most recently, the UK Bed and Breakfast Association hit out at Booking and Expedia for, among other things, "the promotion of casual cancellation" and fostering relationships that "border on the abusive".

But the online travel behemoth is clearly getting something right. Booking's popularity among consumers certainly shows no sign of waning. Their sustained popularity isn't just the result of a marketing spend that reaches into the billions; it's on account of a ruthlessly efficient user experience.

They got it right - early

There's no denying that OTAs were ahead of the game when it came to web design in the 2000s. During a period in which many hotels were only just developing an online presence, Booking.com were honing a user-friendly experience designed to maximise conversion. 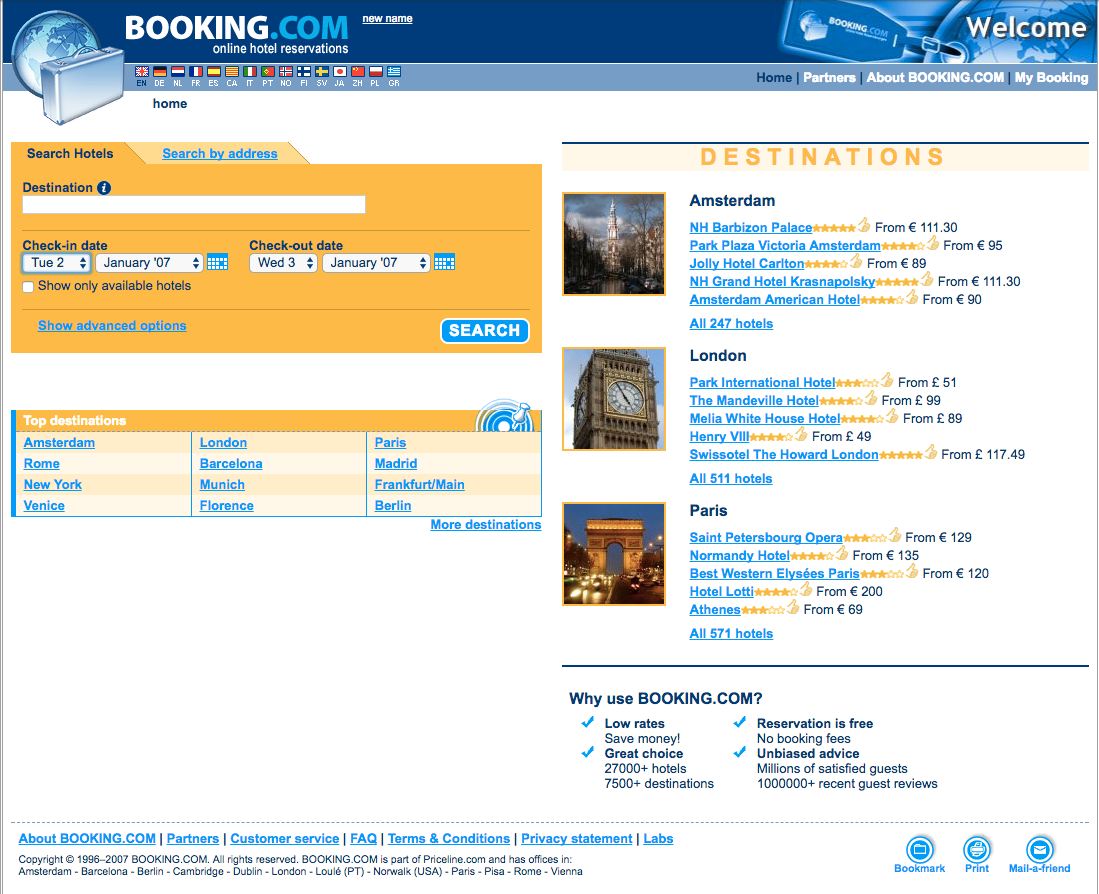 What sticks out most is the similarity to Booking's current site. They hit on a winning formula - early. Most prominent on the page is the search function, which is in marked contrast to many hotel websites even today. Numerous booking engines don't yet offer the functionality of an availability search on the website homepage. While it's true that hotel websites serve a slightly different purpose to Booking.com - they're in the business of winning over guests rather than purely showing them what's available - clear and simple search functionality is the minimum expectation of many guests, especially those brought up with Google. 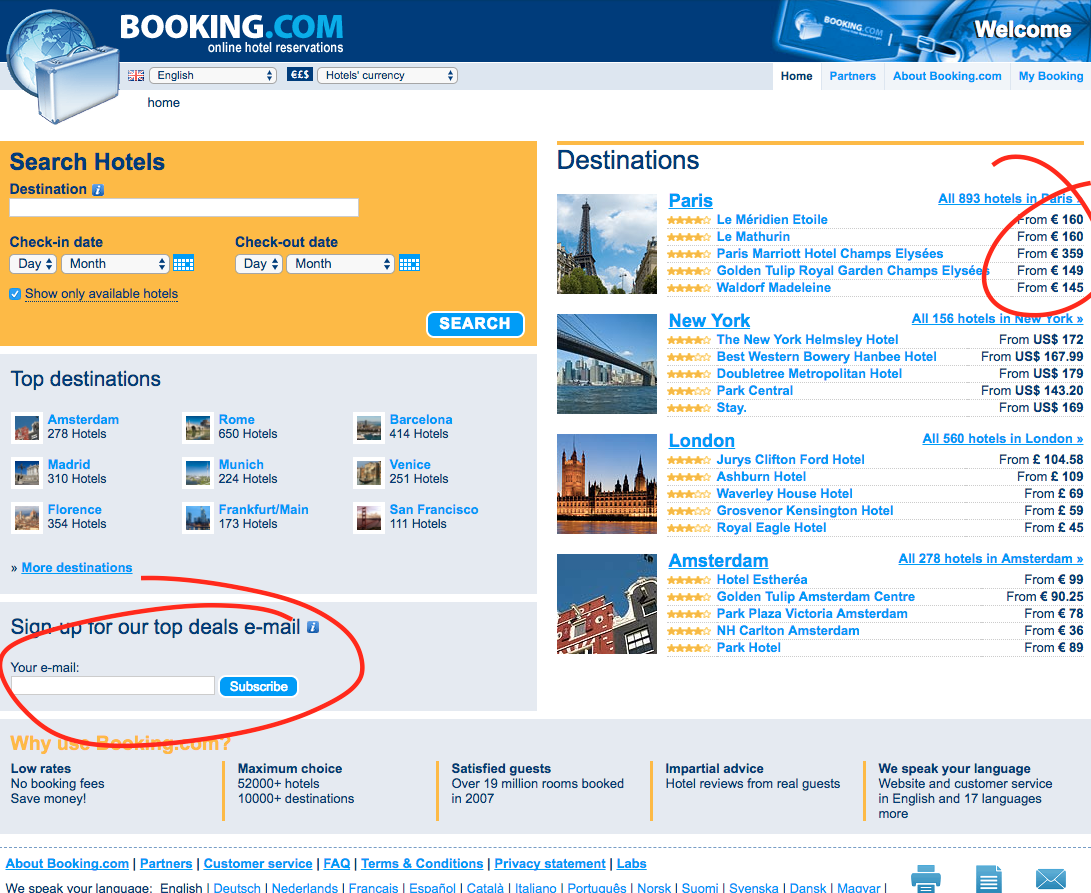 Price is rising in prominence, with the rates on the right-hand-side of the page emphasised more heavily than a few months earlier. The 'search by address' function has also been dropped. Booking is moving away from being a site you use to book a hotel you already know: it's what you use to find a hotel in the location you want to visit.

Another crucial addition - that little data capture field in the bottom left. Booking.com began building their mountain of customer data up early, and have only accelerated since. 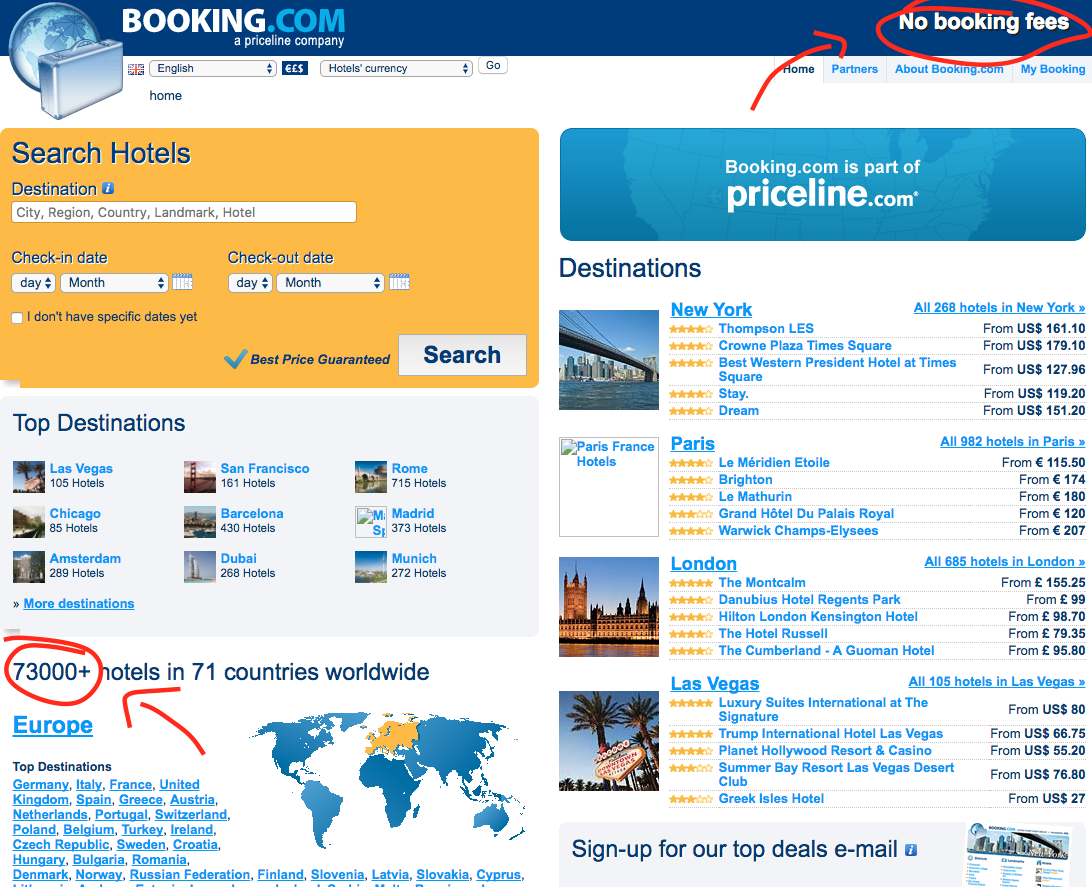 By 2009 we're seeing 'No booking fees' displayed prominently on the homepage. Hotels in 2017 are up against nearly a decade's worth of impact from this kind of messaging: it takes a lot of work to rewire the belief that the cheapest, most straightforward price is with an OTA.

It's also worth noting that the number of hotels listed nearly tripled between 2007-2009.

Hitting on a winning formula

By 2010, Booking.com had perfected their signature technique: the wildly successful 'one room left!' message. 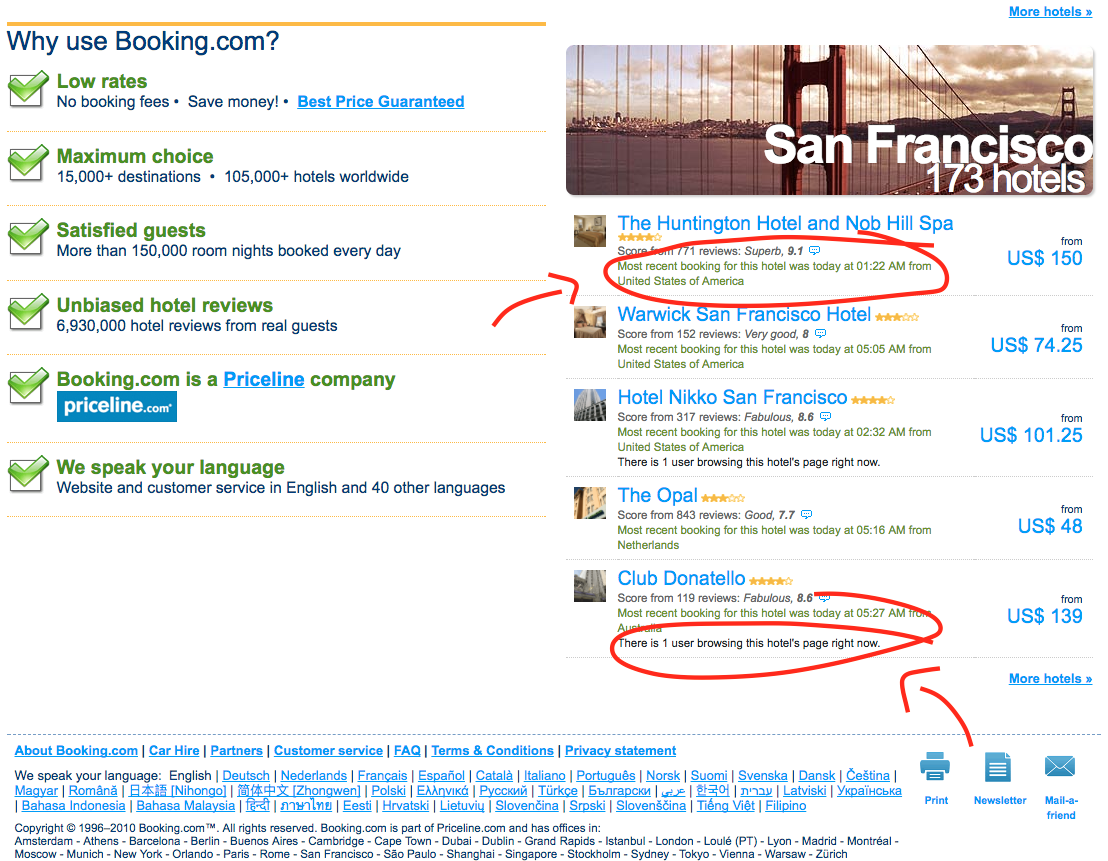 The hyper-specificity of 'most recent booking at 01.22 AM' and '1 user browsing right now' understandably heighten consumer perception of the large OTAs as all-knowing hotel resources. More importantly, they create the sense of urgency that time and again pushes travellers over the line into making a booking. It's not necessarily a feeling that hotels should be trying to cultivate on their own site.

The engaging checklist on the left-hand side of the page creates a clear value proposition for booking with the OTA rather than the hotel. Hotels have been doing the same for a while now, but the volume of 'book direct' messaging campaigns has vastly accelerated in recent years. These campaigns are slowly having a combined impact on the established consumer misconception that an OTA experience is the easiest or cheapest experience. 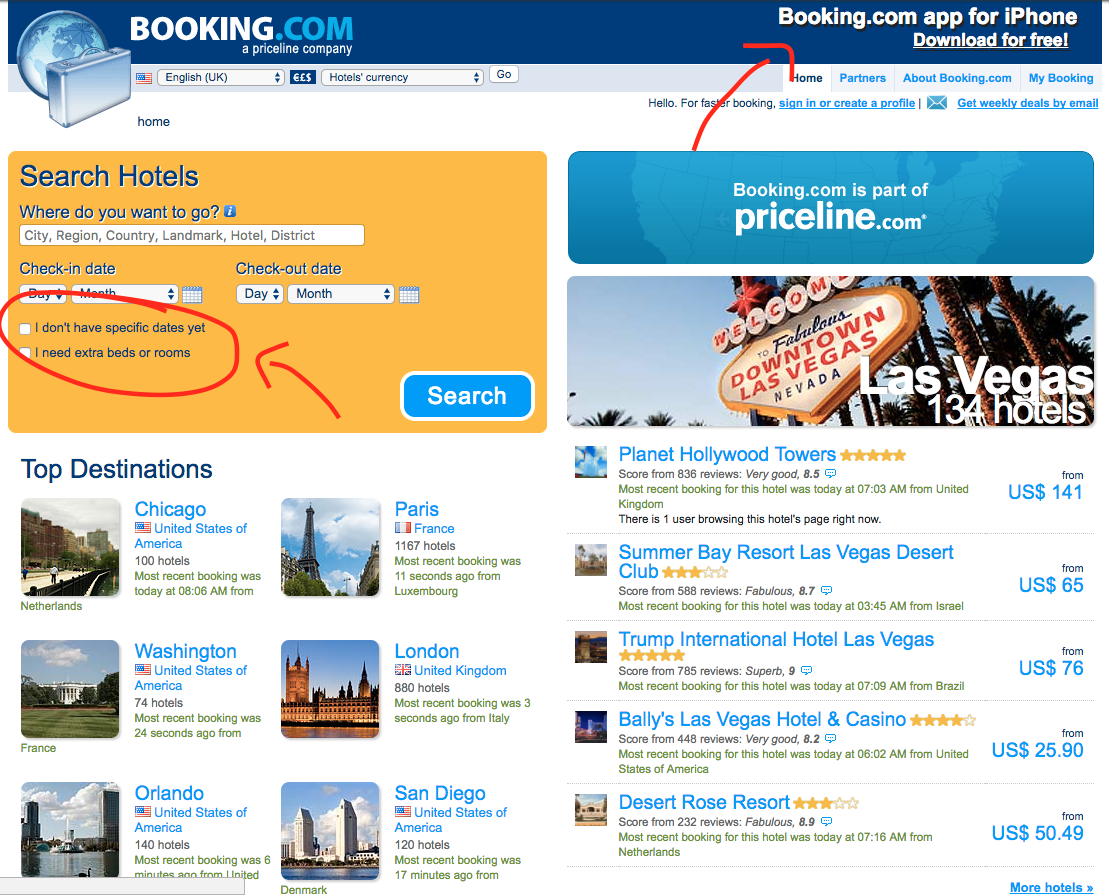 2011 was not the first appearance of Booking.com's iPhone app, but it's in prominent position on the homepage here. Again, OTAs had the scale and resource available to optimise for mobile much earlier than many hotels.

There's a notable lack of adjustment to the main search engine field. Very little has changed since 2007. Two search fields have been added by 2011: 'I don't have specific dates yet,' and 'I need extra beds or rooms'. The site is tactically widening its functionality to capture guests at more stages of the booking funnel.

By 2012, Booking.com are poaching ground from the 'last minute' market and offering 'Flash Deals' to their database: 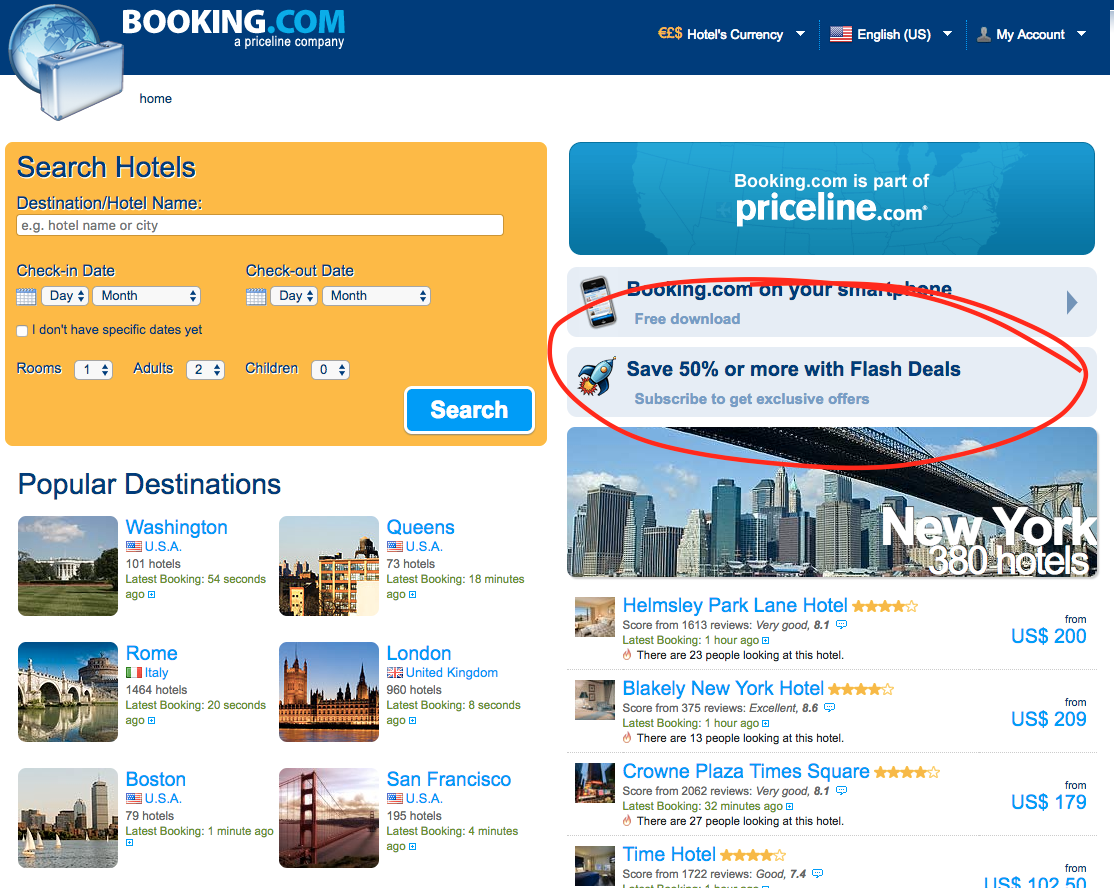 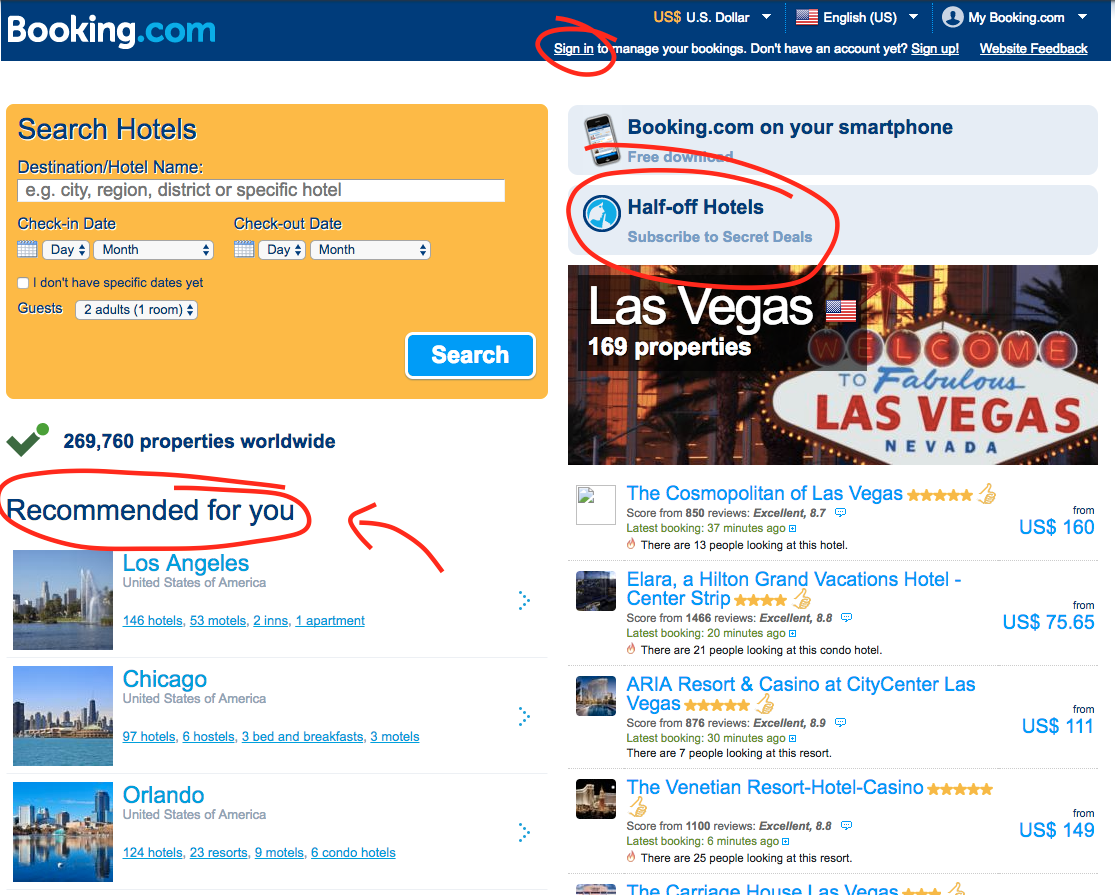 The nudges to subscribe are steadily growing in prominence, with it now being assumed that you'll use an account to make a booking. The site has also rebranded its 'Popular Destinations' to 'Recommended' locations, evidence of being its being able to draw on a massive data scale in order to tailor its homepage to different segments of consumers.

And one more thing - the small matter of a logo change. The updated lower-case logo coincides with the launch of Booking's ubiquitous ad campaign of the same era.

2014 sees the promotion of a real hotel bugbear: 'FREE cancellation on most rooms'. This promise was one of the subjects of the UK B&B Association's recent diatribe against the major OTAs. 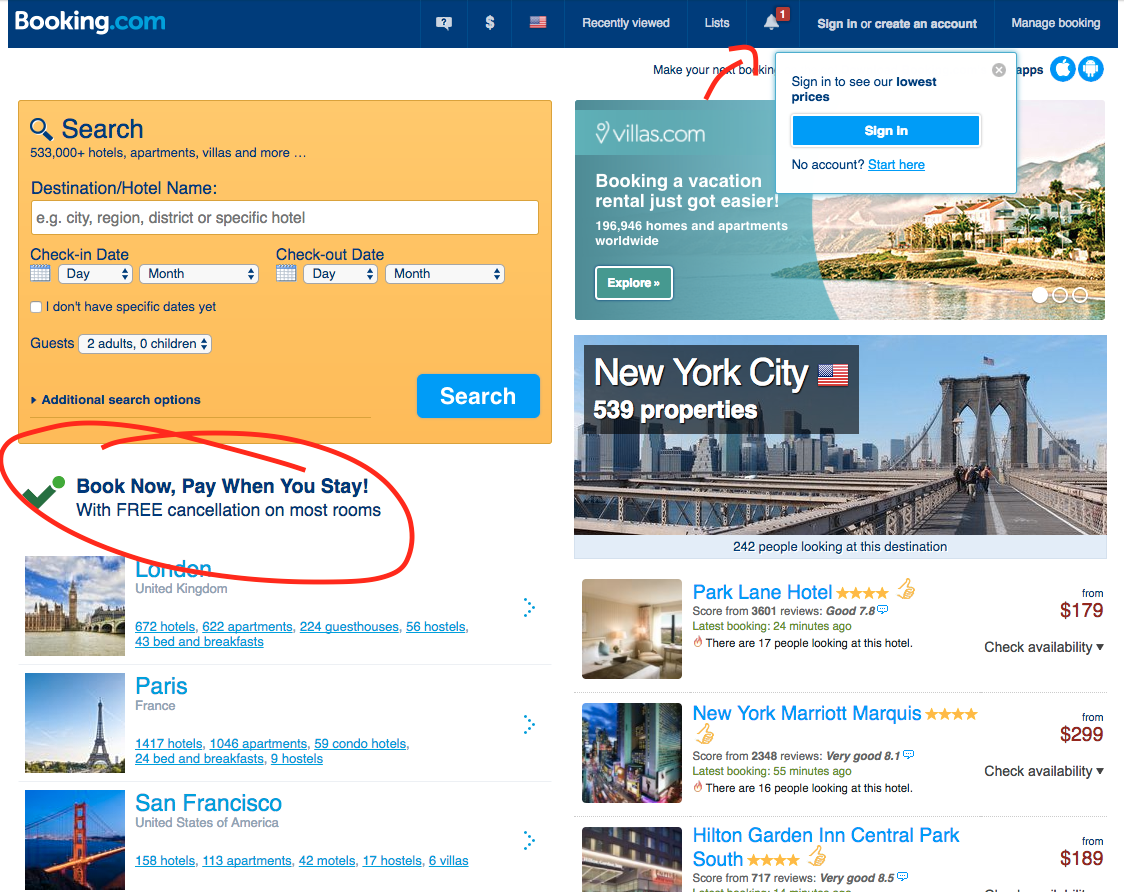 See that little red '1' at the top of the page? Annoying, isn't it? Almost makes you want to click it to make it go away...

By 2015, that little '1' is delivered with an envelope rather than a bell. A tiny change, but you can be sure it didn't take place without an A/B test making sure it was worthwhile.

Also new for 2015 is the addition of a 'subscribe' banner to the search box, an area that historically Booking haven't adjusted too much. 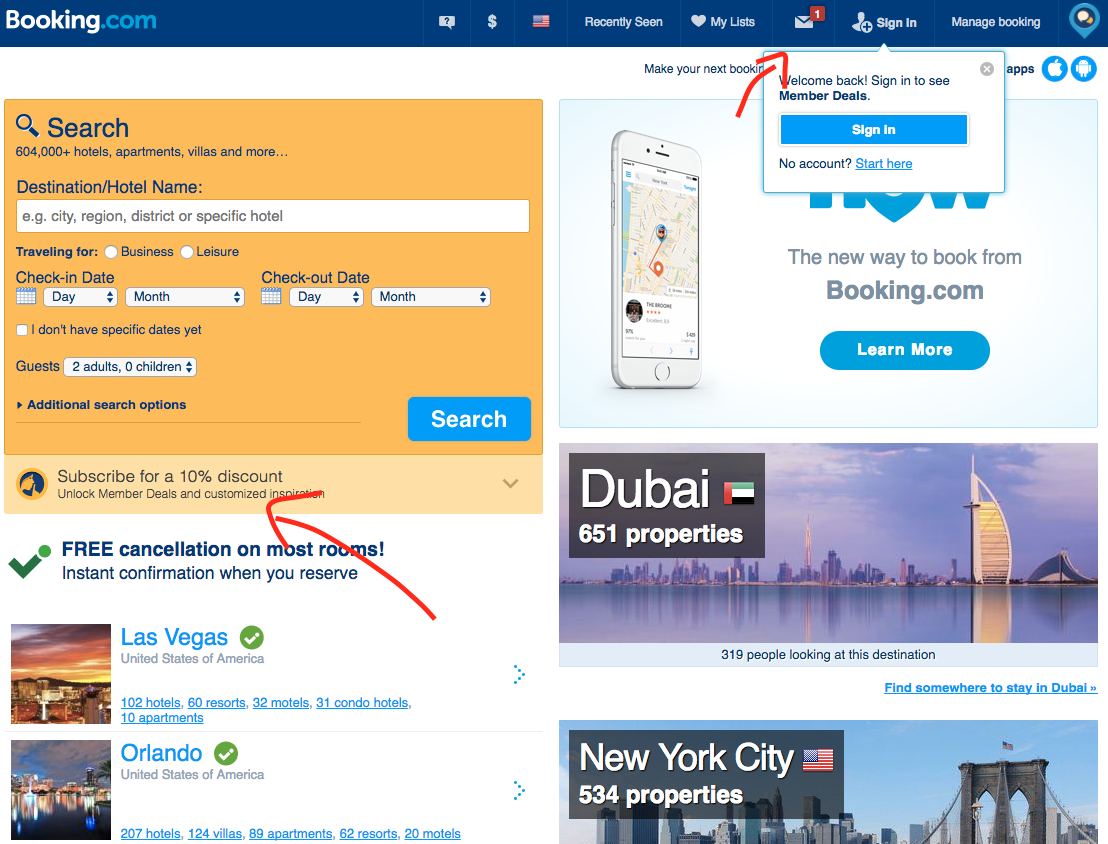 We're only picking out a couple of changes each year, but look closely and you'll see a multitude of alterations - and not just year to year; it would be possible to write the same blog looking at month to month, or even day to day. Sometimes it's just tiny matters of wording - between 2015 and 2016, for example, the word 'business' changes to 'work'. 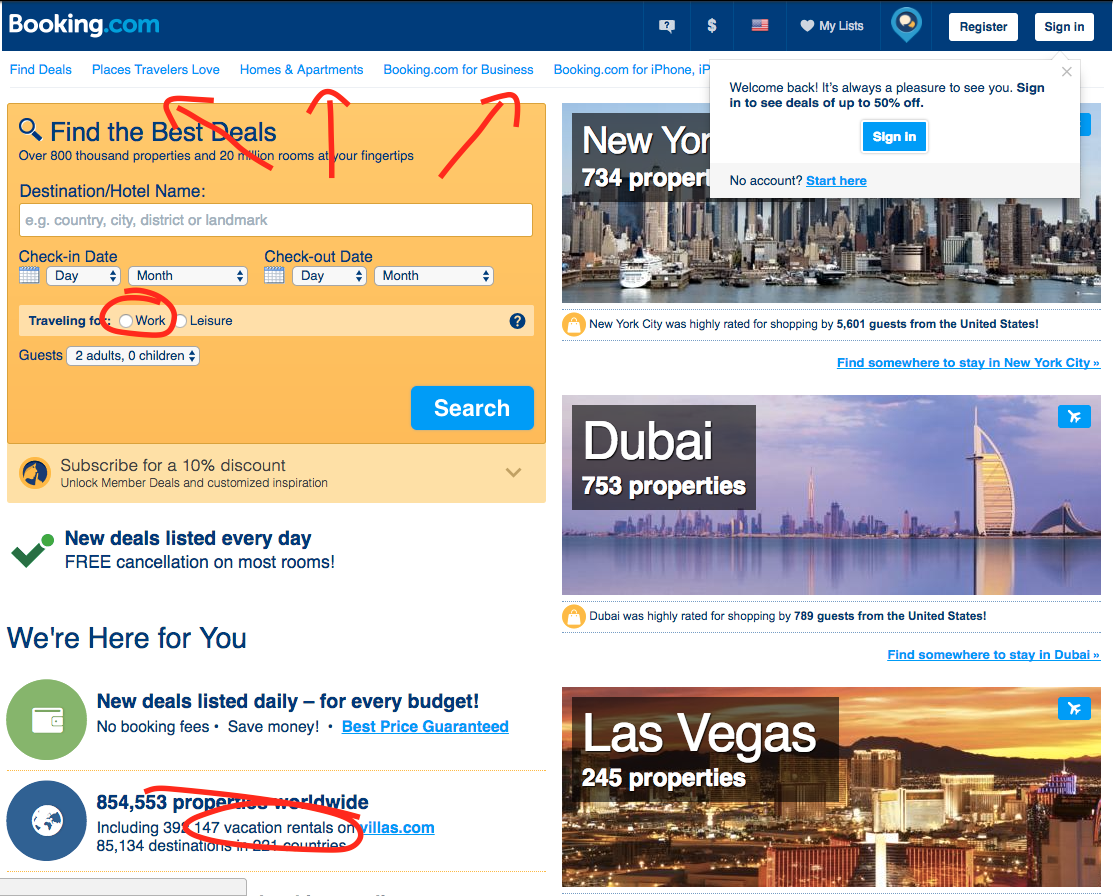 We also see the appearance of an option bar at the top of the page, evidence of Booking's increasing diversification of services. 'Homes and apartments' are advertised both at the top and in the bottom left of the page, in a response to Airbnb's growing market share.

If you blur your eyes a bit, you could be forgiven for thinking the 2017 and 2007 webpages were one and the same. I'm fairly certain my mum wouldn't be able to tell the difference. Despite a decade of intensive testing and iteration, Booking.com have had the wisdom to keep their core user experience unchanged. In the mind of the consumer, it's simple, it's reliable, and it lets them do what they came online to do.

Here's Booking.com's homepage, as viewed on a desktop in the UK on 13th September 2017: 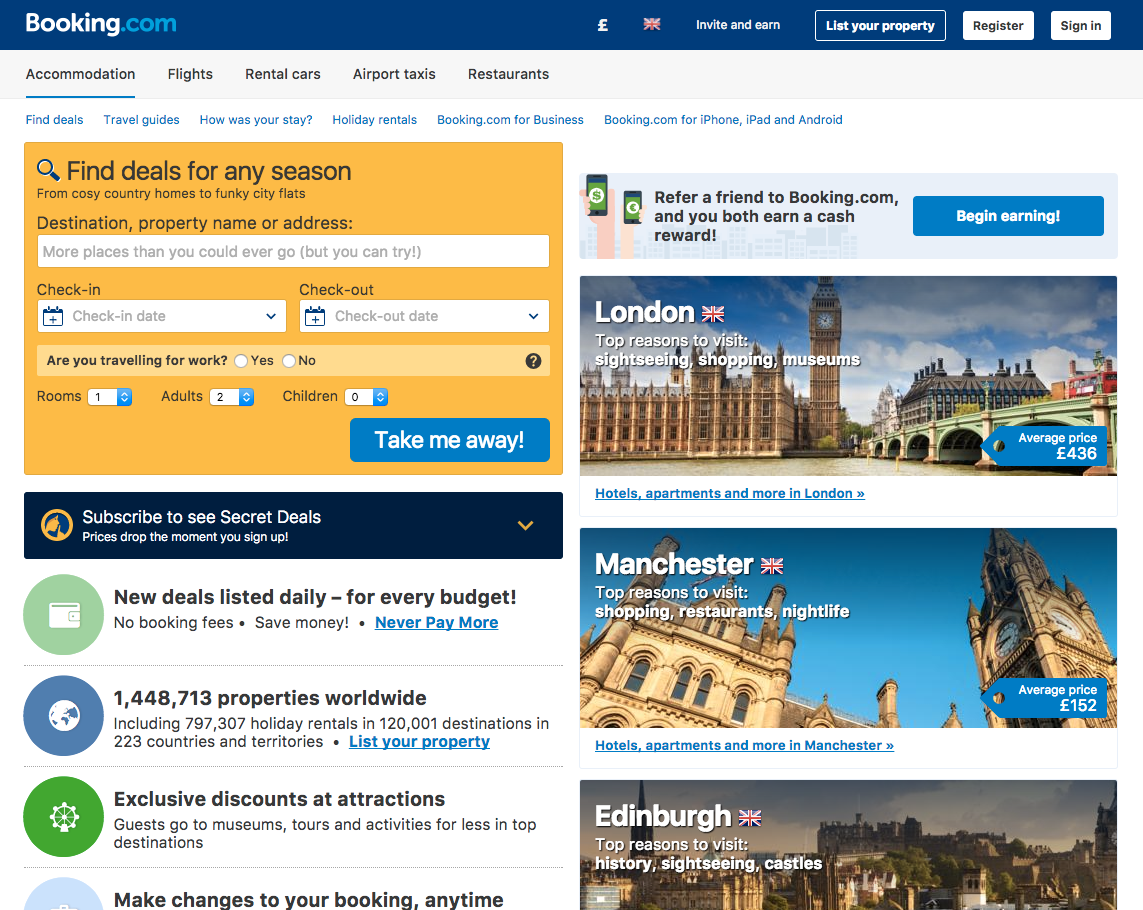 The message for hotels

Booking.com are so wildly successful because they are constantly perfecting their user experience. Now, it's not an uncluttered, calm, or stress-free experience - it's deliberately designed to be an urgent, slightly overwhelming, ruthlessly efficient experience. It's getting users from 'search' to 'book' in the minimum amount of time.

Most hotels don't want to replicate this experience for guests on their website. But their focus on defining and perfecting a certain type of user experience should be exactly the same. Hospitality no longer begins in the lobby, it begins online. Hotels need to learn from how people use their website to make sure they're delivering the best possible service.

What would you say are the minimum must-haves for a hotel website? Let us know - we'd love to share your suggestions with our audience of hoteliers.