Bracing for the future in a Google-first world

We’re at a pivotal moment as an industry: a moment that will be defined by who wins and loses on Google.

"They're using their tactics to squeeze these entities that are delivering real service... I think it's bad practice.”

That's what Expedia chairman Barry Diller had to say about Google in the company's latest earnings call. Expedia is the latest in a string of online travel companies to pin their frustration on Google, following Trivago early last week (the Expedia-owned metasearch site posted a disappointing 8% decline in revenue for the full year of 2019). Towards the end of last year, both TripAdvisor and Expedia laid their losses at Google's door, with Expedia CEO Mark Okerstrom departing his position at the company not long after.

The frustration felt by both metasearch sites and OTAs towards Google has been simmering for some time, but it's clear that Google's increasing prioritization of its own travel product at the expense of its long-time advertisers is pushing these relationships to the brink. Trivago CEO Axel Hefer vented in a recent interview with PhocusWire, "is Google just selling us our own customers over and over again?"

Just last week, we saw Expedia, TripAdvisor and 32 other vacation rental sites accuse Google of competition abuse in a letter to the EU, stating: "We see strong indications of a competitive strategy for Google to reduce us and our industry to mere content providers for the 'one-stop-shop' of Google's new product."

As a hotelier, you could be forgiven for feeling a certain sense of satisfied vindication at this complaint. After all, Expedia has never appeared to have many qualms about reducing hotels to ‘mere content providers’ for their own ‘one-stop-shop’ website. But - justified or not - the accusation is the latest sign that we’re at a pivotal moment as an industry: a moment that will be defined by who wins, and loses, on Google.

So what is Google actually up to? The answer is, as you might expect, a lot. Since launching their fully-fledged travel platform back in 2019, Google has been rapidly iterating its search results format, Hotel Ads platform and Maps experience in a manner clearly designed to keep a user within the Google ecosystem right up to - and ideally including - the point of booking.

Of key concern to hotels, though, are:

The richer Google makes its travel search experience, the harder OTAs and other metasearch sites are finding it to draw users away onto their own platforms. As Expedia’s ex-CEO Mark Okerstrom presciently put it at the end of 2018, “the internet has been littered with the bodies of companies put out of business by Google.” As the ultimate gatekeepers of information on the internet, Google’s power to suddenly switch off the tap to its advertisers is immense.

But make no mistake: this is a long game. Google will continue to want as many players as possible advertising on its platform. OTAs and other metasearch sites will (for the most part) adapt and evolve. It just means that the industry is now playing the game by Google’s rules.

The good news is, there are plenty of actions hotels can take to set themselves up for this Google-first future. Let's start with a simple one: update your Google My Business listing.

The GMB listing is the bedrock of Google’s hotel search results, and its quality will determine how relevant Google deems you to be to its searchers - particularly in the context of localized searches. When somebody searches ‘hotels in [x]’, either from the main search platform or within Google Maps, they’ll find below the paid search listings a ‘pack’ of four hotels. Your ranking in this pack depends on your local SEO. The more up-to-date your GMB listing, and the more citations there are of your address online, the better your local SEO. 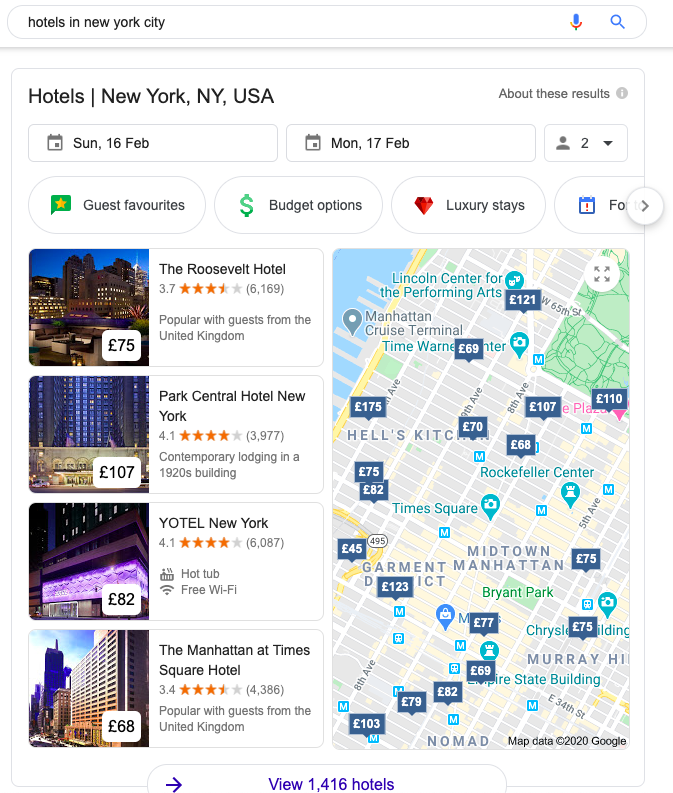 At last year’s Direct Booking Summit in Paris, YOTEL's Joe Pettigrew spoke about local SEO as where you gain your market share and metasearch as where you gain your channel share. Once you’ve built up your relevance on local SEO and done the hard work to get users clicking on your listing, it’s up to you to make sure that an OTA doesn’t eventually win the booking. This is where it’s time to focus on how you appear in the metasearch auction. If you want a quick refresher of what metasearch is and how it works, check out our Hotel Metasearch Handbook.

If you’re not already listing your hotel on Google Hotel Ads, it’s a good idea to consider it. Only running a campaign on GHA will ensure that your direct website link appears in the list of prices that appears for a branded search.

But setting up a campaign is just the start. All too often, we see hotels listing a rate on Google’s metasearch that is being significantly undercut by OTAs and even by other metasearch sites. In this scenario, the hotel is effectively paying to advertise that they don’t have the best rate. More often than not, users click through to the direct site to check out the rooms and amenities, but will return to book on the site with the cheapest price.

So - parity is important. The first thing to do, if you haven’t already, is to get a sense of how often you’re being undercut, and who the worst culprits are. For immediate and ongoing visibility on this, Triptease’s Parity Monitoring Dashboard provides a live feed of every instance where a guest has found a lower price than your direct rate, along with data on your overarching parity trends. For more parity advice, check out the Direct Booking Playbook too.

If you're looking to the long term, though, you need to be taking preventative action to make sure your direct channel stays relevant in a Google-first future.

The key to strong, sustainable rate parity is knowing where your rates are going. All too often, hotels aren’t familiar with their wholesale contract terms or even which of their channels are most productive. The fewer your distribution partners, the smaller the chance of your rates leaking out to so-called ‘Random.coms’ - those websites you’ve never heard of that pop up in your hotel’s metasearch auction, somehow selling your rate. Having three distribution partners who you know deliver incremental value to your hotel is infinitely preferable to having a dozen contracts of which you only have a vague idea of their incrementality and cost of sale.

And then there’s the contracts themselves. Wholesalers can’t really be blamed for taking advantage of some pretty gaping loopholes in the contracts they hold with hotels. Consider implementing ‘no-sell’ restrictions on your wholesalers within 14 days of check-in date - you shouldn’t be relying on bedbanks during this period, and it’s up to you to make sure there’s no incentive for your partner to offload some cheap rooms.

It’s also up to you to know your rights, and how to enforce them when necessary. We spoke to one determined hotelier who hit the ‘Random.coms’ she found re-selling her rates with lawsuits alleging tortious interference - the intentional damage of somebody else’s contractual relationship, causing economic harm.

Overhauling your distribution and partnerships strategy might feel more painful and less urgent than setting up a quick campaign on Google Ads, but it’s ultimately what’s going to save you plenty of parity headaches in the long run. Having the best rate as often as possible is what will keep your direct channel relevant and visible for as many guests as possible.

While it might be tempting to revel in the OTA struggle to stay relevant on Google, it’s important for hotels to heed the warning this situation contains. OTAs and metasearch sites alike have been burnt by complacency - by an over-reliance on the status quo. Hotels need to take advantage of the opportunities available to them now in a way that strengthens their long-term standing and security.

That means focusing on sustainable parity management rather than quick price drops and fixes; clear monitoring of cost of sale by channel rather than indiscriminate short-termist distribution; ensuring guests acquired by any channel know the benefits of direct for future bookings.

Hotels are in a unique position to ensure that Google doesn’t just ‘sell them their own customer again and again’. Make the most of the acquisition opportunity presented by a Google-first world. Putting the work in now could be the key to avoiding the frustrations and losses your OTA partners are already beginning to feel.

The Summit marked another step towards more control and knowledge sharing across the industry. Hear from attendees and re-live some of the best...

We are excited to announce our new partnerships with six of the world's leading booking engines. Hotels using the Availpro, WebHotelier, Idiso,...

Are humanless hotels the future?

Last week we wrote about the hotel that is run by robots . We asked travel expert and Digital Sociologist Lisa Talia Moretti to dig deeper. Our...